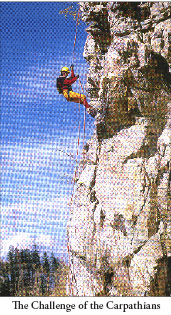 Romania is a land situated in Eastern Europe, on the Western shores of the Black Sea and on the lower course of the Danube River. Its neighbors are Bulgaria and Serbia to the South, Hungary to the West, Ukraine to the North and East, and the Moldavian Republic enclave and the Black Sea to the East. The Carpathian Mountains form a crown in the centre of the land, surrounded by hills which roll gently into the plains. The climate is temperate continental - with four seasons - but, because of the Black Sea influence and the protection given by the mountains in  the North, the whether does not have extreme temperatures. The highest temperature goes up to 30 C (in the South), the lowest to -20 (in the mountain valleys), with an average of 25-28 C in the summer and -7C in the winter.

All those geographic features and climate give a particular character to Romania. One may visit the country in the lush spring, beautiful summer, golden autumn, or snowy warm winter and the person will enjoy the scenery and the many possibilities to spend in good conditions that vacation. Either swimming in the warm Black Sea or hunting in the woods, fishing in the rivers or lakes, climbing the rough mountains, visiting the famous vineyards - one will meat each time a different façade of Romania.

And then, there are the people. The true Romanian can be met in the villages, where the ancestral traditions still linger, bringing in the 21st Century a vivid folkloric tradition as old as the Romanian people themselves: almost two thousand years! Music and dance, woodworking, tapestries and clothing, icon and eastern egg painting, ceramics, food and drinks - all inherited from our ancestors - co-habited with the modern urban life style. From the oldest town in Romania, Istria (7th Century BC) to medieval cities and the capital, Bucharest, the Romanian cities have the mark of its inhabitants, be they Romanians, Hungarians, Saxons, Jews, Turks, Serbians, Armenians, Greeks or others.

I will try to pinpoint some destinations. Keep in mind that in the 36 years that I lived in Romania, I did not have enough time to see but a fraction of the many beautiful things Romania has to offer. I will indicate only a few of them, leaving the traveler the pleasure to discover on his own the hidden treasures of this magnificent country.

Traditionally, Romania was divided into several so-called "ţări"(counties) which, eventually, united themselves into principalities . The "ţări" (counties) remained until today as individual zones with specific customs and traditions - although the people speak the same language. One can distinguish between the dressing styles, music and dance types, even the type of houses belonging to  each of the ‘folkloric zones'. I think that one way to introduce Romania to you through its different "ţări" is as good as any other way.

The Southern zone where the Capital is situated is mostly a plain area. In older times, a great wild forest covered most of the land, and the villages where rare, doting the landscape. On  the Northern part of the province, in the hilly regions, they were more numerous, and on the Danube existed a few ports and castles. Now, except for the plains, where the settlements are mostly agricultural, the Northern cities are industrial (Ploieşti, Piteşti, Târgovişte, Câmpina, Buzău), wine production (Dealu Mare region), and mountain resorts (Sinaia, Buşteni, Rucăr).

Muntenia, known historically as Valachia, represented the heart of the principality with the same name. The oldest capitals of the principality were at Câmpulung, than at Curtea-de-Argeş and Târgovişte, from where it has moved to Bucharest. The first three cities still have impressive ruins and churches dating from the 14 and 15th Century. The Argeş and Cozia Monasteries are beautiful monuments, worth visiting.

The most important city is Bucharest, the capital of Romania. First mentioned in a document during the reign of Vlad III the Impaller (1459), in the 17th Century it became the capital of Valachia. Ruins of the Old Court ("Curtea Veche") could be visited in the old section of the city - mostly commercial now, important tourist destination for its numerous art galleries. But most of the city's buildings date from the second part of the 19th C. and the first half of the 20th C., after a fire destroyed most of the city. Called the "little Paris" between the wars, it still preserves its aspect - despite the huge destructions made in its centre by the megalomaniac Ceausescu to make room to the huge "People's Home", the biggest building in Europe at this time. A few churches survived, precious stones in the crown of the city, and the capital is surrounded by many monasteries (Snagov, Cernica, Căldăruşani, Ţigănesti), all of them interesting to visit. The many parks, museums, restaurants, art galleries, theatres make Bucharest a destination that requires at least 3 days for a visit.

Oltenia is an old "ţara", first mentioned in 13th C. Part of the Valachian Principality, is separated from Muntenia by the river Olt. An area with a rich musical tradition it is important by its old customs and wine regions. The Northern area presents numerous churches and monasteries, caves, health resorts (with natural,hot and mineral waters), ceramic manufacturing centers... The eastern region (Mehedinţi) is even more pristine in folkloric treasures. 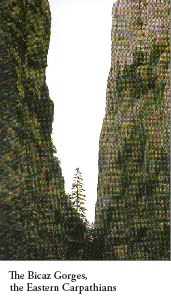 Situated in the South-Western part of Romania, its history mangled with that of Hungary and Serbia. Occupied by Hungarians (12th C), than by the Turks (16th C.) and  the Austrians (17th C.), its places preserve traces of all those occupations. Furthermore, the population is a mixture of Romanians, Serbians, Hungarians, and Germans ("Schwabs") - resulting in a very interesting type of folklore, especially near the mountain regions. The principal destination is Timişoara, but there are a few others: Caransebeş, Caraş region, Lugoj, the vineries at Miniş, and Semenic resort.

Situated on the Western part of Romania, between the border with Hungary and the (Apuseni) Western  Mountains, washed by the Mures, Criş and Someş Rivers, it is the oldest mentioned Romanian land, as the Hungarian kings in their expansion towards Transylvania (11-12th C.) were confronted by the Romanian "kneji" (dukes or military leaders). The main destinations here are the cities (Arad, Oradea, Satu Mare), the medieval fortifications (Şiria, Şoimuş, Ineu), the old monastery at Hodoş-Bodrog, villages in Zarand county, resorts in the mountains...

One of the most interesting folkloric zones in Romania, considered as a preserver of the old Dacian traditions, it is a county in itself to become a destination. Each village is a treasure, with its wood churches (oldest since 14th C.), cemeteries, wood gates, ceramics, clothing, wood manufacturing, music and dance, food and "horinca", the strong plum brandy.

It was part of the Moldavian Principality. The princes had their capital at Baia, Siret and, until moved to Iaşi, at Suceava. All those cities and towns are worth visiting, as well as Piatra Neamţ, Roman, Huşi (wines), Cotnari (the best wines in Romania) and Cucuteni (around Iaşi)...

The oldest towns in Romania can be found in  this province: the ancient Greek colonies - Histria, Tomis, Callatis... The land "between Danube and Sea" has many interesting destinations: the Danube Delta, the only delta of Europe, the "kingdom of water, birds and fish"; the sea coast with its beautiful beaches and sea resorts; the famous vineries at Murfatlar and Ostrov, the ruins at Tropheum Traiani (Adamclisi), the 4th C. chalk monastery at Basarabi, and the modern Tomis - Constanţa, the principal harbor on the Black Sea.

This is the name used by the population of Transylvania to name their land. Many different counties (‘ţara' Fagarasului, Bârsei, Târnavelor, Bistriţei, Codrului, Haţegului, Cibinului, Moţilor, and Pădurenilor) are quite close in their customs  and dialects. Together with  the Romanians, the province was inhabited by Hungarians - since they conquered the area (12-13th C) and Saxons, brought by the Hungarian Crown as colonists (13-14th C). In the eastern mountain valleys are dwelling the "Secui", a Hungarian population brought probably in 14th C (some historians consider them either Avar or Khazar enclaves).

The special destinations in Transylvania are the castles. There are many feudal castles built mostly by the Saxons (Brasov, Sibiu, Sighisoara, Medias), but also "peasant" castles built by the villagers around the churches (especially in the Bârsa county), and the castle built by the Teutonic Order at Bran (1214) - well-known as "Dracula Castle". But, there is more than that: the Dacian "dava" (castle) ruins (especially in Haţeg county; Sarmisegetuza, Deva), Raşnov, Cluj, Alba, Turda; the old churches at Densuş, Cârţa, Râmeţi; the monuments in the cities of Braşov, Sibiu, Cluj, Alba, Sighişoara, Tg. Mureş, Hunedoara; the vineries at Târnava, the health resorts at Sovata, Tuşnad, Borsec, Balvanyos; the ski resorts at Poiana and Paltiniş; the folklore "treasure boxes" at Bran and "Mărginime" (South of Sibiu). 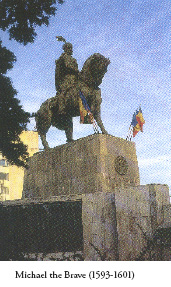 Carpaţii (The Carpathians or The Transylvanian Alps)

I decided to present separately the mountains. The Carpathians form a whole crown of mountains on the Romania territory, with the Transylvanian province in the centre and the rest of the provinces spread around. They are mountains that could be easily crossed, with many inhabited valleys, and with pasture areas excellent for grazing even on the highest  elevations. This fact permitted the mountains to become the "cauldron", the hearth where the Romanian people became an entity during the centuries. The mountains and their woods were the very place where the population took refuge, running from the migratory people's attacks.

Now, the mountains are a place where many young people spend their vacation - or even the long weekends. Easy to access even the highest tops in a few hours of climbing, with many chalets built at a few hours distance each from another - permitting a rest, a meal, and even a good night sleep in fair conditions, the Carpathians are a great destination.

Among the many interesting places to see, I will indicate but a few, starting from the North. To the East, the principal destinations are Rarău Mountain and Ceahlău, "the Moldavian Olympus", with interesting rock formations. The Southern Carpathians are the most visited by the tourists: Ciucaş Mountains (the "Sphinx", "Ţiglele"), Bucegi (Sphinx, Babele, Ialomicioara Cave, Caraiman, etc), Piatra Craiului (a tougher climb), Făgăraşului (the tallest mountains in Romania, with 3 tops over 2500m, many alpine lakes and tremendous views over the Făgăraş county); Retezat (the "pearl" of the Romanian mountains, the most wild and pristine zone - transformed in the largest natural reservation in Romania besides the Delta), and Apuseni, a land in itself, with tens of interesting caves.

As you can see, Romania has many things to offer, in a land as big as a quarter of BC. A traveler needs two, at the most three weeks to visit all the interesting places. There are many traveling companies that offer good services nowadays - organized tours with good guides, but one can arrange one's own tour. There are many good hotels and motels, many restaurants, and the trip can be made easy using trains and buses - if not renting a car. Though, the best places to sleep overnight are the many houses offered for rent (the so-called "agro-tourism"), where the host, a Romanian peasant will serve traditional food and show you many traditional items. Another place to stay is one of the many monasteries who offer cheap and extremely good services. Romania is one of the few places in the world that can still be seen with less than 50CAD a day   !